Little did the Bristish World War II Veterans, who participated in the first un-official Paralympics back in 1948, know that they would be starting an international sporting event that would be paralleled to the Olympic Games.  In 1960 the first official Paralympics were held with 400 men and women participating in 30 events.  To find out more about the sports included in current day Summer Paralympic Games CLICK HERE.

This competition is continually growing and changing to incorporate more and more disabled people.  Initially only amputees were included, but today the event has participants with disabilities such as hearing impairment, blindness, cerebral palsy and mental illness.

Check out the Paralympics Youtube channel to watch previous competitions and to learn more about the sports!  And, don’t forget to watch them on TV or at CBS.com, they begin August 29th and finish on September 9th. 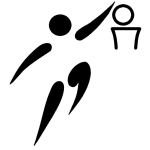 Though basketball may have American roots, it is embraced my countries around the world. This year’s US “Dream Team” will be going up against the world’s best during the Olympic Games, with some of the international teams having NBA players on the roster. There has been argument about this year’s US team being better than the original 1992 Dream Team, but one has to admit that some of the greatest NBA players have competed in the Olympics over the years. This year, the team includes Kobe Bryant, LeBron James, Kevin Durant, and numerous superstars. There will not be an argument about which basketball team is greater in this post (though I am partial to 1992 but only because my younger self was in awe of the team) but this year will be exciting nonetheless.

Both men and women have been playing since its creation in 1891, with the women picking it up in 1893. In 1936, Men’s Basketball was added to the Olympic roster with 21 teams competing.  Women began competing in the Olympics in 1976 with 6 teams. This year, there are 12 teams in both the men’s and women’s categories competing for gold.1 Until 1992, the US sent a team of amateur players to compete, but once the rules changed the “Dream Team” was born.

With the Finals for both the Men’s and Women’s Teams happening this weekend, there will be a lot of coverage if the US teams are dominant again. We have a few titles on Basketball here at the library including rulebooks. For more on the Olympic Games check out these sites:

1Statistical information was taken from here.

There are two primary types of gymnastics included in the Olympic Games – rhythmic & artistic.  In artistic gymnastics, women perform on the vault, uneven bars, balance beam and floor exercise, while men perform on the vault, pommel horse, still rings, parallel bars, high bar and floor exercise.  While, rhythmic gymnastics utilizes music and all events are performed on a padded floor – this second type of gymnastics was not introduced to the competition until the 1984 Olympics.

One final “fun fact” about gymnastics as a Summer Olympics event: for the first 32 years of the modern Olympics, from 1896 – 1928, only men were allowed to compete in the gymnastics events.  To discover more “fun facts” and to view a list of resources about the sport of gymnastics CLICK HERE.

For a full listing of events and the Summer Olympic Schedule taking place this year in London, CLICK HERE.